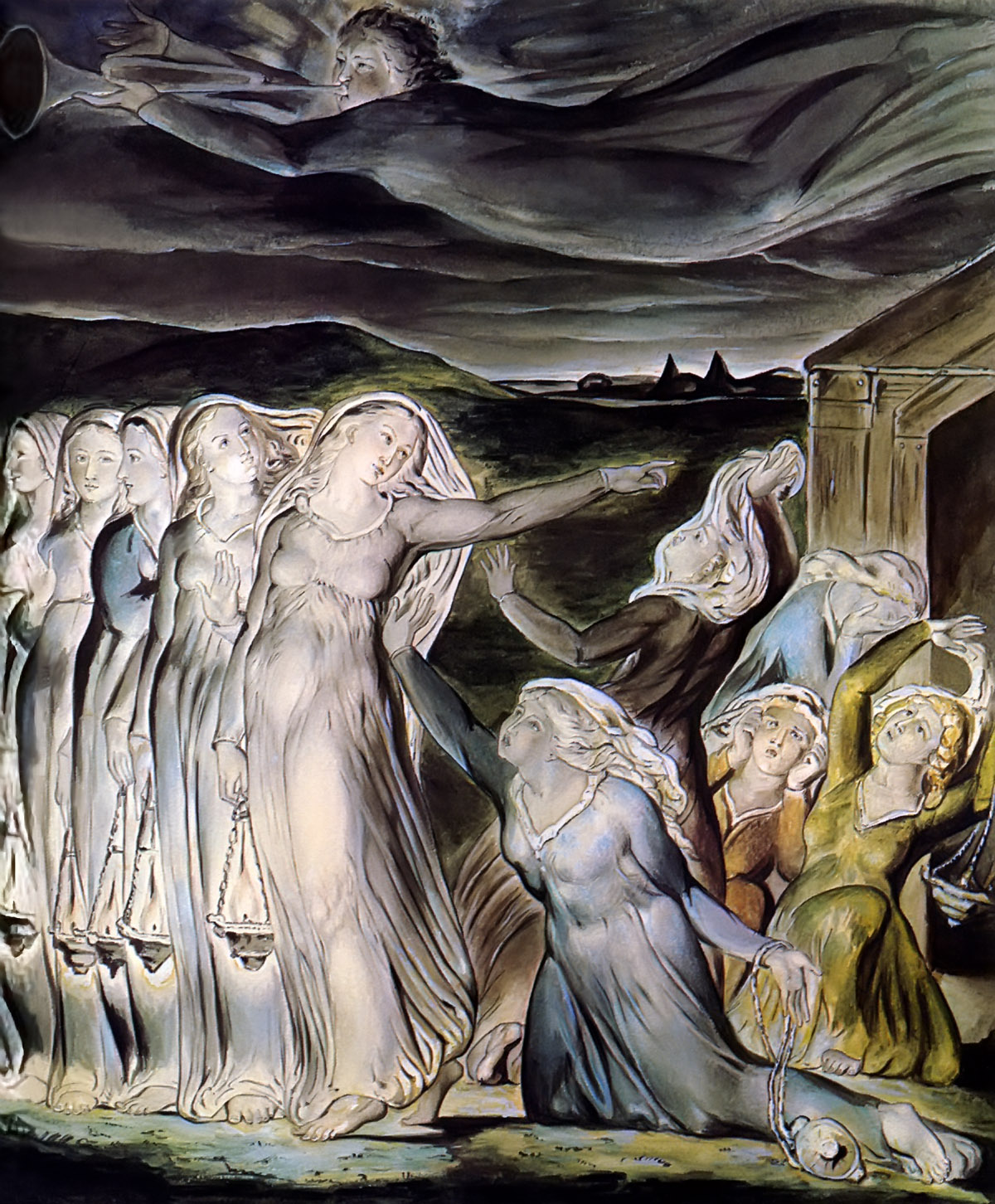 Weddings, then, like now, were elaborate affairs. They probably lasted a whole week. In first century Jewish weddings, the man would first be betrothed to the bride, like Joseph was, to Mary. This would be as strong as the wedding itself, requiring a divorce to break it. He would then go to prepare his house, the place for his bride and come back to take her (recall, John 14:1?), marrying her with much festivity. In the meantime, she would continue living with her parents, though by all means, she was now someone’s wife. Her identity had changed, even though the circumstances of her life had not. The climax of the celebrations would be the last day, when the bride would be taken in grand procession, accompanied by her bridesmaids to the groom’s house. Missing that would mean, missing everything.

The gospel presents us with ten women: the Greek word marks them as ‘virgins’ or ‘young women of marriageable age’, rather than ‘bridesmaids’. In the Scriptures, the number ten refers to a whole quantity, something represented in its completeness. There are ten commandments, which cover all the laws of God for living. At creation, God spoke ten times, bringing all of the world into existence. Jesus speaks of himself as “I AM” ten times in the gospel of John. The ten virgins indicate together, the whole Church. There is no bride, because these virgins together are the bride, the Church, whom the Bridegroom, Christ was coming to espouse. It was not unknown for the bridegroom to be delayed. At this time, all ten of them, eager in their anticipation of the Groom, come to meet him, lamps filled with oil, in their hand. What is this lamp, and what is this oil that some bring in great quantities, while others don’t? I would like to suggest to you, that the lamp is the gift of divine life, given in baptism. It is the container, the potential to burn brightly, to give light to the world around you. What is this divine life, except the capacity to love, love like God himself? God exists as three-persons-in-one, in the infinite community of Love, where each gives completely of oneself to the Other. While this capacity to love is given in our very existence, in baptism, we were inserted into this self-giving explosion of Love, which is the life of the Trinity. This was the gift given and this remains our fundamental vocation. To become saints, to be able to love like God himself. But growth in love requires practice, it requires work; this work in love, I would suggest, comes about in your vocation.

The primary vocations – marriage, religious life, priesthood – are all meant to do the same. To be married is to be formed in love; not simply an erotic, ecstatic love, though it is an important part of it. That eros has to be infused and informed with the self-sacrificing love of agape, without which the marriage will be destroyed. When one lives out their marriage, the whole family becomes a school of love: children learn to give way and to honour each other, the father and mother show by their own love and respect for each other, their constant care for their children and others, what it is to sacrifice and love. So is priesthood and religious life. At the heart of the priesthood is the call to Fatherhood. It is to give of oneself just as a good father would give of himself to his family, but to embrace a much larger family that is given to him, by God’s grace.

All work though, can provide similar opportunities. At least in the traditional ‘vocational’ work, such as teaching, nursing, caring, policing, even politics (although that might sound incredulous in today’s climate), all contain elements which call for a change of the person. They are elements which are unified in the call of motherhood and fatherhood. To be a care-worker, is to have a heart that has compassion, that cares. Even if one does not start off with that, that is what one is meant to grow into. To be police officer, again, is to exercise a duty of care, of guardianship, of authority, rightly expressed (aspects of fatherhood). In our technocratised society, however, work is seen as the expression of a skill, rather than a vocation. Skill are tradeable – indicated by the money paid for the work done – persons, are not. Skills are acquired. Anyone can acquire a skill with the right training. It is something else to become a person who embodies what the vocation calls for. Those who allow themselves to be transformed grow fully into people who love. They love, in their own unique way, bringing their own light to the world. Skills are extremely important. I want to know that the surgeon operating on me, is competent and knows what he is doing. It would be little assurance if he loved people but could not really remember what he had learnt. A care-worker with the right skills might do the job efficiently; however, they will not be willing to put do anything more than what they are paid to do. Someone who truly cares, will give of themselves. Those who receive such care will know they’ve been touched by something unique, a love that heals.

If the lamp is the capacity for divine life, the oil is that love which animates it. Oil, obtained from the crushing of many olives. It is in all these particular, even mundane moments of life, where we do the small actions that love calls for – that only one who loves will do – that those olives are crushed to produce the beautiful and unique oil, ready to burn brightly. One crushed olive produces nothing. But together, the small things done over a lifetime, produce oil that can burn through the night. The virgins in the parable, are ‘virginal’ – their love is focused, has found its goal. It has not been spent everywhere, dissipated into nothingness.

All ten intend to wait for the bridegroom. All are indeed, virginal in their love. Not all are prepared, though, able to cope with the demand of love that goes beyond what was expected. Some have only acquired skills, at best. The fact that they ask for the oil of the wise virgins – indicates their belief that it can be traded. They have found their value only in their skills, rather than who they are, letting themselves be transformed in the events of their life. The door is closed, as they try to trade even at the last moment. They are just one among several with the same skills. But to be transformed is to become someone completely unique, someone reflecting the Image of the Bridegroom in a way no one else can. It is these that the Bridegroom can recognise as his own. They burn uniquely, give a light no one else can. Love cannot be anything but personal. On the last day, when the Bridegroom, a ‘consuming fire’ (Heb 12:29), will set those who have their own virginal love, their oil, with his own fire. As St Catherine would say, ‘Become who you are and you will set the world on fire’. This is the invitation for us today. To not necessarily achieve the greatest things. But to do ‘small things with great love’ (Mother Teresa).